I got a little bit excited and watched it at work, holding in my giggles as I reflected on that all too familiar feeling of failure. Keeping another human alive is hard and seeing the ultimate rebellion unfold in this movie it got me thinking about ways I blow off my steam. I am looking forward to checking it out on August 11th. Time for a night off with the girls me thinks, who’s in? 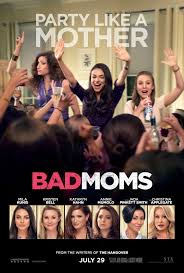 I had a few Mum fails this week. Matisse found my nail polish decided to spill it on our bed and pillows then rub it in her eyes. She came screaming running in to the shower, yes I left her supervised by Playschool while I had a shower and she got adventurous. I felt terrible.

What I have learnt: Leaving creams, lotions, nail kits or anything that can spill/be spread in my bedside table is not such a good idea. Finally I moved it all in to a cupboard much higher and now she has full access to my socks and jocks. It was one of those stupid things that I have been meaning to do and fortunately there was no serious damage done.

I am a big believer in passive parenting and trying to stay on an even level when disciplining. This particular day we had been up early, the Matisse alarm is harsh sometimes. We had plenty of time to get organised for playgroup, go for a walk, went to the shop, had a snack got home and I was exhausted.

I can tell when I need to take a break but sometimes the toddler won’t give you that space. I was trying to get her organised for her nap i.e. Find the missing teat for her bottle (frustrating) and as I am scrambling through the disgustingly disorganised cupboard she decides to jump on my back and wrap her-self around me. Feeling the strangulation as my top pulled ever so tightly on my neck I gave a very swift three warnings and then I pulled her off my back and said no, don’t do that. She stood there bawling and holding her arm and again I felt terrible.

It sounds so silly and small but it’s moments like these that I see her emulate when she feels frustration or dissatisfaction and I don’t want to model this behaviour. Sometimes this strong willed, beautifully stubborn toddler pushes all of the passive buttons no amount of yoga breaths will stop that boiling feeling from taking over my brain.

Hi! I'm Kate, I hail from Melbourne with my three loves, Willow, Matisse and my husband Dan. I enjoy staying active, attempting to be crafty, discovering new recipes and fun things to do with my daughters. I have found that becoming a mum has tapped in to this raw positive energy that I never knew I had. In this weird new world I live in I've found that I need to look after myself more to keep myself healthy and be a positive role model for the littler ones. Keeping this in mind has kept me on track to create the best me and be a better Mum. Well it's a work in progress but we all need to aspire to something right? I am also a writer, chugging away at that elusive novel but now is the time people. I am writing and you get to hear all about it, just joking, I won't bore you with that. If you want to know where I'm at please feel free to ask it might give me a boot to get me going in my less motivated of moments. I'm passionate about women's rights, equality, children's rights and mental health. I want to say social justice as a whole but it is so broad. I believe we all have the right to be the best that we can. I look forward to getting to know you all and sharing my crazy life. View All Posts

Got any amazing gardening tips? or want to purchase some AEONIUM ARBOREUM